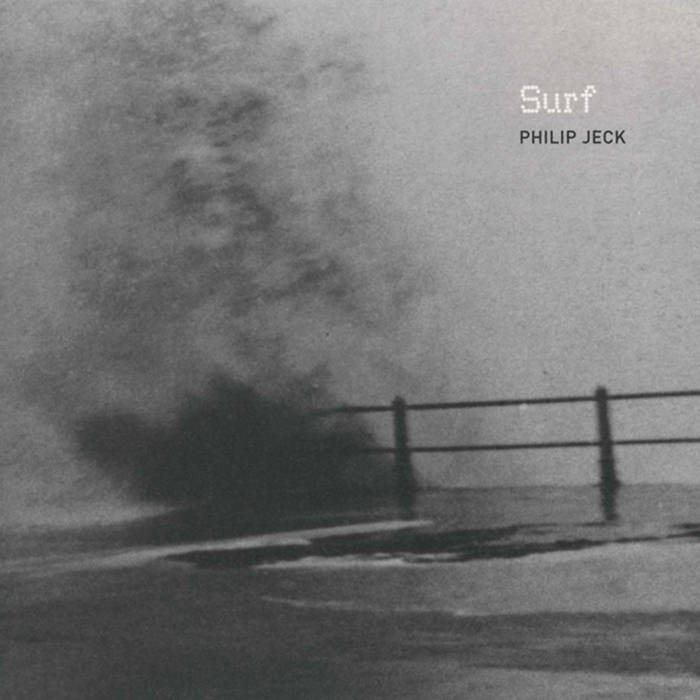 Jeck is a UK experimental turntablist who extracts sounds from old battered turntables like an archaeologist excavating some ancient vinyl burial site, using surface noise, skips and crackles, to weave dreamy sepiatone soundscapes of underwater waltzes and pastoral murk. Surf is quite possibly the perfect realization of Jeck's sonic vision. Sinister loops and minor key melodies slither through blurred landscapes of sound, rickety and decaying, shimmery and indistinct. Like blurry postcards of someplace you've never been, or a fleeting memory of someone you've never met, translated into sound. A sound so warm and thick, familiar and inviting, that it transports you to a sonic universe where a skipping record becomes your footsteps, and a repeated crackly phrase becomes the wind through the trees. Easily one of the most transcendentally perfect records ever.

The notion of turntablism may be associated with flashy, deck-hopping scratch gymnastics, but the use of the record player as an instrument harks back to a less ostentatious tradition of music making. John Cage, Karlheinz Stockhausen, Pierre Schaeffer, and James Tenney recognized records and turntable mechanisms as manipulable sound sources. In essence, sampling began with the real-time deployment of gramophones in performance by theseartists and academics.

Philip Jeck, like peers Christian Marclay, Otomo Yoshihide, and Martin Tetreault, legitimizes the turntable as a musical instrument. On SURF, Jeck lifts sounds from old vinyl and treats them in fascinating ways. The fragile melody of "Box of Lamb" arises not from direct quotes but from a well-considered reconstruction of the source-vinyl sounds. Preserved pops, crackles, skips, and scratches lend complex rhythmic character to the profound loop-based atmospheres of "Demolition," "Spirits Up," and the loping, almost funky "I Just Wanted to Know." "1986" works a Woody Woodpecker sample, an insistent guitar phrase, and swatches of nostalgic music into audio bricolage brimming with humor and analog warmth. "Surf Finger," electro-acoustic gamelan music masterfully cemented with effects, and the vertiginous CD-skip simulation of "Tilting" provide SURF's most intriguing moments.

Philip Jeck works with old records and record players salvaged from junk shops turning them to his own purposes. He really does play them as musical instruments, creating an intensely personal language that evolves with each added part of a record. Philip Jeck makes geniunely moving and transfixing music, where we hear the art not the gimmick. ... more

MF DOOM is given his flowers, plus appearances from MC Jada Imani and Stanley Ipkuss